In which Michael Pollan convinces me to go on an LSD trip for the first time in 30 years, with pleasantly surprising results 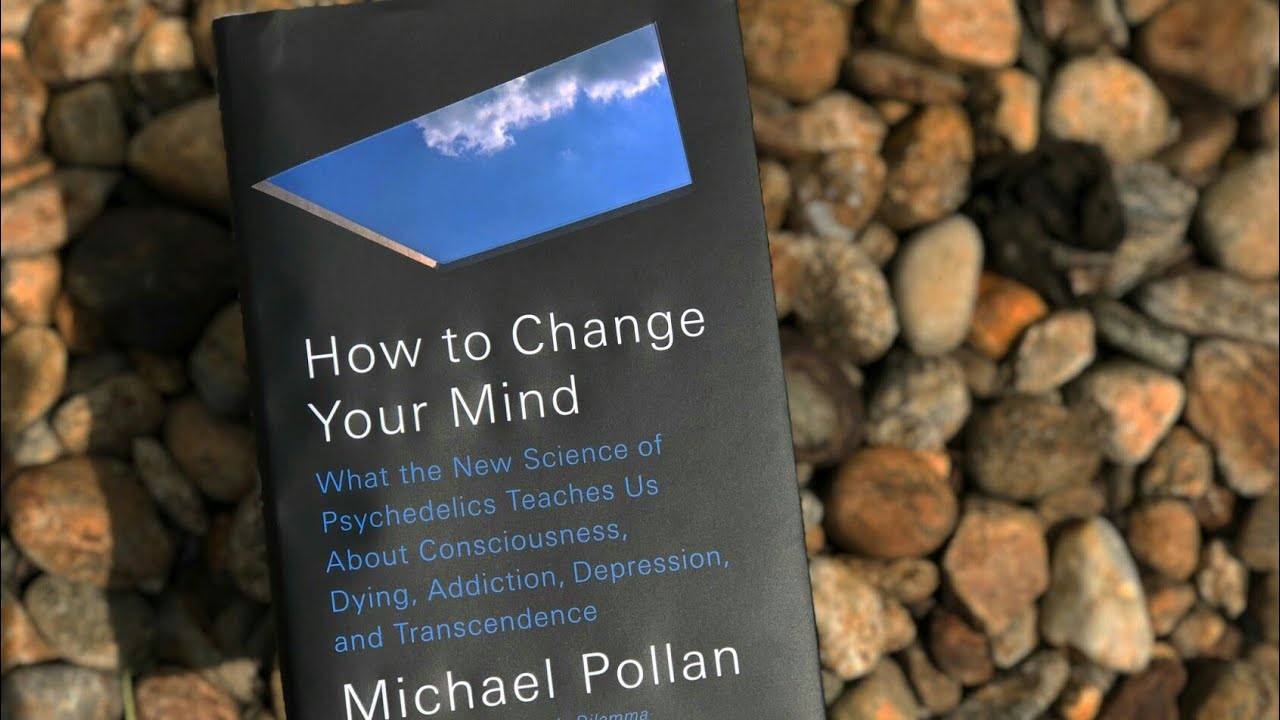 Hey, guess what? I took LSD for the first time in 30 years last week! Like most art majors in the late 1980s, I took psychedelics around a dozen times as a college student, a combination of LSD and mushrooms and MDMA; but once I left school and moved to Chicago in the mid-1990s, I left behind my psychedelics habit and considered it over for good, because the experiences would always wipe me out so much and I had thought that I had pretty much learned everything useful that I could from them.

Last summer, however, I read Michael Pollan's new book How to Change Your Mind, which got me thinking about the subject of LSD again for the first time in a long time. A celebrated long-form journalist who so far in his career has written mostly about food (regulars will remember me bugging the shit out of everyone at Twitter last summer while reading his mind-blowing The Omnivore's Dilemma), last year Pollan wrote a massive 400-page overview of the absolute latest scientific research into psychedelics, weaving in the pre-countercultural history of LSD (back when it was considered a mainstream prescription medication for treating things like depression and addiction), the interesting left turn LSD took in the 1960s (when Timothy Leary essentially singlehandedly turned it into The Greatest Menace Society Faces), and the quiet research into LSD and brain activity that's been going on in the 1990s and '00s, under the guidance of respected academic institutions and the latest generation of MRI brain-scanning machines.

The consensus that's starting to emerge from this research — and the subject that takes up the biggest chunk of Pollan's book — is that our brains are basically made up of a bunch of different sections that do different things, much like the sections of an orchestra; and that there's a section scientists call the “Default Mode Network” (DMN) that acts like the orchestra's leader, taking all the input from all these other sections and processing them in a way that makes rational sense. When we say that someone is “sane,” that essentially means that their DMN is working correctly, taking cues for example from the eyes (“I see that my finger is over a candle flame right now”), skin (“Ooh, it's getting hot down here”), and memory (“The last time I touched a flame, I burned myself badly”) to then send a very logical and sensible signal to the rest of your system (“Take your finger out of that candle flame, you moron”). This is also the section of the brain that's responsible for what we call “consciousness” or “self-sentience,” basically the phenomenon of us being aware of ourselves, aware that we're a distinct person with distinct memories and opinions; or in other words, if you're an atheist like me and don't mind the risk of going to hell, the Default Mode Network is what we've traditionally referred to over the millennia as “the soul.”

According to many of the scientists who have been studying this, what LSD actually does is not “turn on” sections of the brain that are usually turned off, the prevalent theory about psychedelics we've had for centuries, but in fact turns off the DMN while allowing the rest of your brain to stay on and working as normal; and without the orchestra leader to make rational sense of it all, the various other sections of your brain are free to directly communicate with each other in a way they don't usually get to, which is what produces the hallucinations, heightened senses, and unusual thought processes that we typically associate with psychedelics. And, according to these scientists, since various maladies like anxiety, depression, addiction and PTSD are all essentially nothing more than a DMN that's not working correctly, taking LSD can often serve for such people as a “reboot” of their system, which is why so many people in recent years and under tightly controlled guidance have seemingly experienced the “miracle” of being entirely cured of their depression or addiction after just one single LSD trip, including the founder of Alcoholics Anonymous, who literally coined the phrase “higher power” to explain the profound experience of taking psychedelics to combat addiction, just one of dozens of fascinating anecdotes I learned for the first time while reading Pollan's book.

Needless to say, all this got me really interested in trying LSD again, this time so I could experience it through the prism of this new understanding about the DMN, and to see how my brain might process the “trip experience” now in middle age and understanding a lot more about myself and the world around me than I ever did as an undergraduate. It took me six months, but I finally tracked down a single 100-microgram tab; and on a wintry day a couple of Saturdays ago, I took it at 9:00 in the morning, and basically tripped my balls off until 5:00 that evening, staying in my apartment the whole time while dressed in my pajamas and listening to downbeat electronic music for eight straight hours. My full 4,300-word journal of the experience is at my Google Drive account, which I'll be linking to again at the end of this post, but for those looking for the tl;dr version, I'll mention the highlights now...

—To begin with, it's pretty amazing how perfectly every detail of the trip experience can be explained if you believe in the theory about the Default Mode Network; and especially interesting is the way the DMN seems to work as a series of concentric rings, with the more lizard-brain stuff like sensory perception on the outside and the higher-brain stuff like intellectualism in the middle core. That's why, I theorized, when an acid trip starts out, the first effect is altered sounds and visions, and why the “peak” is always so cloudy and hard to remember afterwards; that's literally when the part of your brain that deals with consciousness is most shut down, but it's also the part that wakes back up the fastest. And that's also why the effects seem to come in a perfectly symmetrical parabolic curve; after not noticing them in the middle of my trip, for example, the altered sensory perceptions once again became the dominant effect during the last hour or two of my trip, which made me theorize that they're the last section of the DMN to “wake back up,” after being the first to get turned off.

—And then the other biggest surprise was how much different and more pleasant my trip experience was when doing it during the day, by myself, without ever leaving my apartment, and having no particular obligations other than to just be in my own head and wallow in the experience as much as I wanted. Like most other college students, when I did acid as an undergraduate, it was exclusively overnight experiences (dose around 9 pm, come off it at 5:00 in the morning), always done with a bunch of other art-major undergraduate friends, and almost always as an accompaniment to social obligations, either parties or heading to a bar or very often while attending an all-night rave. I didn't appreciate it at the time, but doing LSD by myself made me realize that so much of the paranoia and exhaustion of my college trips, the cotton-mouth and sore muscles, was actually because of the activity and drama that came with doing acid with a bunch of other undergraduates in the middle of the night while running around in public for hours, and not from the acid itself.

Doing it solo while staying at my place the whole time made it a much more laid-back and pleasant experience, and gave me an opportunity to fully enjoy the effects without being distracted by feuding teenagers or suspicious cops or the glaring fluorescents of a convenience store, an immensely preferable option that I strongly encourage others to do if they're going to trip for the first time. And starting at daybreak while ending at sunset was a beautifully metaphorical experience as well, poetically synchronous which made me feel in touch with the various shamans and sages who have taken psychedelics for mystical and psychological reasons over the centuries; and perhaps most importantly, the drugs were entirely out of my system by the time I went to bed that night, versus doing LSD as an undergraduate where I would often go an entire two days straight before getting any decent sleep, yet another aspect of why I felt so frazzled and exhausted whenever doing acid in college.

Anyway, I had a lot more thoughts and insights while actually on the trip, including my theories on why some people have Charles-Manson-style psychotic breakdowns when doing acid; why it's become known as a “party drug” in recent years despite the fact that it's not actually a social experience in any way at all; why it's so common to feel closer to nature or to experience a “oneness with the universe” while on psychedelics; and why good-looking indie-rockers who flail around on a stage are so irresistible when you're 25 but slowly lose their siren-song charm the older you get. The entire 4,300-word journal is over at my Google Drive account, for those who would like to read a lot more.

This week's task for the 52 Week Photography Challenge I'm doing this year was to take a “landscape image in reflection,” so I thought this would be a perfect opportunity to take my new DSLR down to the Chicago tourist mecca known as Cloud Gate (aka “The Bean”), using the tripod and remote shutter I got for Christmas. This is the first shot I've done this year that could only be done with a DSLR instead of a cellphone camera, and I'm quite happy with the results. As always, stop by my Flickr account for more of the technical details of how I achieved these shots, and to see a lot more.