And so begins ASL 2, but with a Meetup twist.

After a two month hiatus, I've finally resumed my study of American Sign Language, this time with the help of a new group of fellow students I started at Meetup.com

[Need to get caught up on the entire saga of me learning American Sign Language (ASL) and getting involved in the Chicago Deaf community this year? The complete set of links is at the bottom of the page.] 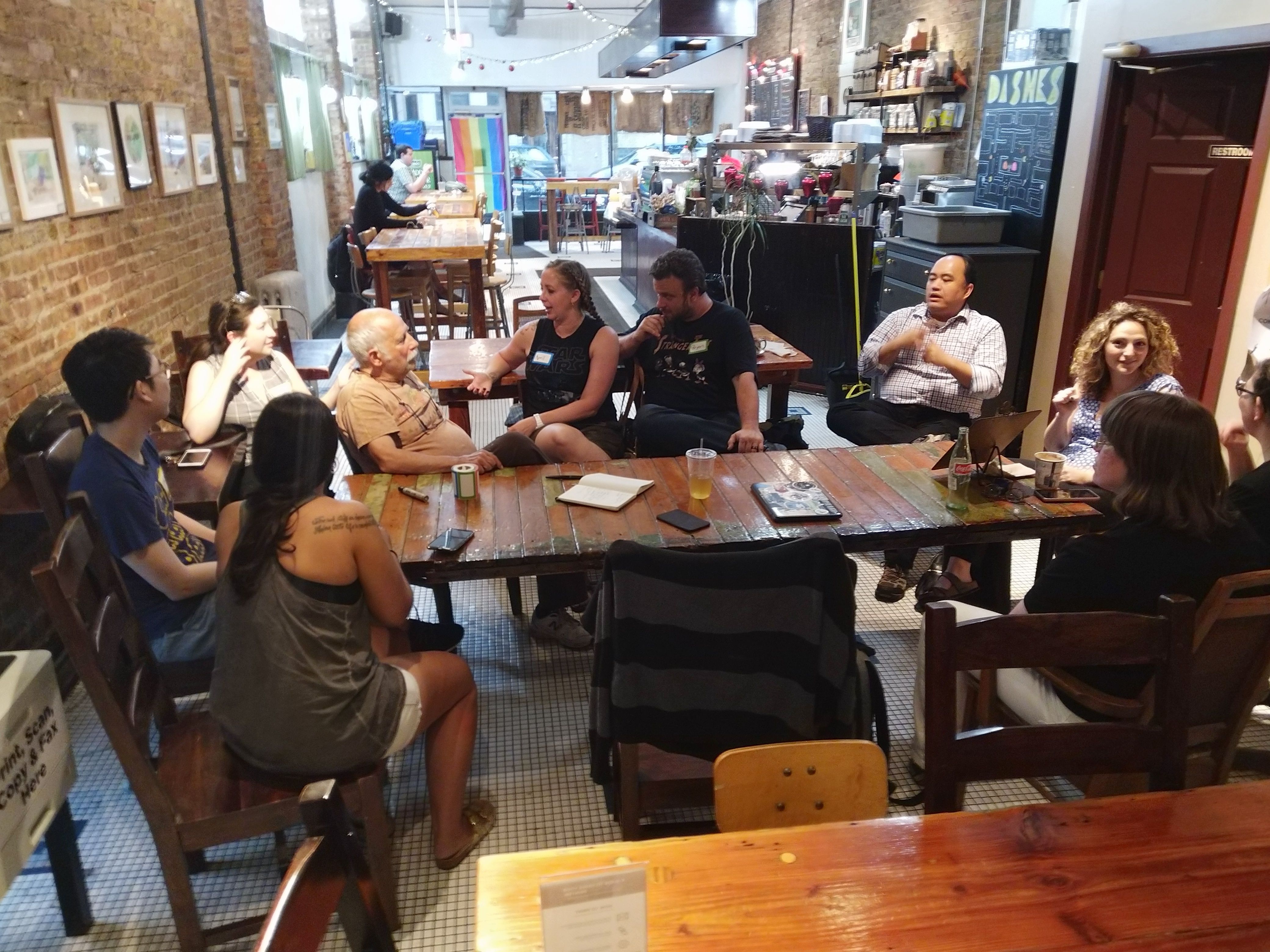 Well, hello there! “Sorry” that you haven't heard from me since the beginning of May, although I'm not really sorry because I was taking a deliberate break, albeit one that was originally only going to last a month but ended up stretching into two months. The simple fact is that, when I was deeply into doing my daily lessons for my ASL 1 class earlier this spring, I was finding it harder and harder to shift my attention to the drudgery of trawling the internet for more freelance work, something I kind of hate doing in the first place, and that was super-easy to blow off when I was so deeply engaged with learning sign language. As you can expect, though, that got me way behind on my finances; so when my ASL Institute workshop at Columbia College ended in early May, the same time that I finished up the free ASL 1 online classes I was taking at Lifeprint.com and StartASL.com, I decided to take a break from it all for a bit, so that I could re-dedicate myself to the crappy stupid dreary business of making rent and not starving to death.

It was a good pause for me, because I find myself re-energized and excited all over again to start my ASL 2 classes this week; but I also discovered that one of the oldest cliches about learning a language is true, that taking just a little time off from it starts making you immediately forget everything you've already learned, especially true when you're on the tail end of middle age like me and the learning comes slow to begin with. It wasn't exactly a disaster; but definitely in mid-June when I started reviewing the thousand ASL terms I already know, I discovered with some alarm that roughly a third of them now wouldn't naturally pop up from memory when I was trying to sign them, versus the five percent when I was actively studying those thousand terms back in March through May. And when I tried having a video chat with my Texas friend Joy, I learned that my recall for pulling up terms out of thin air was so bad, we pretty much couldn't have a conversation at all.

And why did this suddenly become an issue particularly in mid-June? Well, because that's when I started Meetup.com's very first group dedicated to the Chicago Deaf and ASL community! Or, well, as I learned after stating it this way while promoting it at Facebook, it's not technically the very first group in the history of Meetup devoted to the subject, just that the first one was shut down because the organizers didn't want to keep paying the fairly outrageous $180 a year it costs to maintain a Meetup group; so I suppose it's more accurate to say that my group is currently the only group at Meetup devoted to the Chicago Deaf and ASL community.

Regular readers will of course remember my growing frustrations this spring with trying to find conversation practice partners. Fluent signers at Deaf social events go way too fast for me to keep up, and I feel guilty about asking such people to slow down their conversations with their friends just to accommodate me. Random partners I find through Facebook to do video chats with come and go like the wind, because most of them have decided to learn ASL just for fun, not because they need it as a communication tool like I do as a late-deafened adult; and I've discovered that 95 percent of people in that situation tend to give up as soon as things get hard, which means that nearly everyone I meet through Facebook disappears again just after one or two practice sessions. I thought maybe I'd be able to make friends with the teachers and students at Columbia College during my evening workshops there, and continue to meet up for ASL practice that way; but the teachers get paid so little that they really want nothing to do with students like me, beyond whatever exact minimum amount they are required to interact with me to earn their paychecks, while the students tend to all be nineteen-year-old girls, making it an inherently creepy proposition to try to solicit them for evening one-on-one get-togethers (hashtag me too).

It's been getting me quite frustrated as the year has continued, because with me mostly learning ASL at home online by myself, interaction with other signers is even more important than usual (and usually it's pretty important to begin with). But as I've mentioned before in this blog, I've been trying to take inspiration during my Deaf studies from the Deaf community itself, who tend to have the very refreshing attitude of, “If you want to do something, you better freaking go out and make it happen, because no one is interested in sitting around holding your hand and doing it for you.” So I bit the bullet, made the $180 commitment, and started up a Meetup group; because if I can't find existing places to meet up with other ASL students so we can all practice conversing, then damnit, I will bring those other ASL students to me.

Actually, I have bigger plans than that with the Meetup group — I also want to regularly host social events specifically for people who are already fluent, just so they can have fun with each other, as well as vocabulary workshops specifically for beginners, where we all spend an hour learning 20 or 30 new words on a specific theme (online terms, LGBTQ terms, foods, sports, etc), and plans are in the making for starting a gaming club through the Meetup group, both for board games and for roleplaying games like Dungeons & Dragons, something I can't even think about doing seriously until I get conversationally fluent myself, so likely not starting until next summer. But for now, the Meetup group is mostly being devoted to one-hour coffeehouse conversation practice sessions, which I'm trying to do in a different neighborhood every other week, on a rotating schedule of different weeknights in case anyone works in the evenings and has a specific night that's always busy for them. So far we've done them in Uptown and Logan Square; coming up is Oak Park (late July), then Beverly (early August), Wicker Park (late August) and then Hyde Park (early September). If you'd like us to come do one of these in your own neighborhood, by all means drop me a line at ilikejason@gmail.com and let me know.

So far it's been exactly like what I've been trying to find in the city, which pleases me to no end. Some people are little more than novices, and know maybe five or ten signs altogether; some are close to fluent, and are attending mostly just for fun; while the majority of other attendees are just like me, vaguely in the area of being somewhere from an ASL 1 to ASL 3 student, who have learned somewhere between several hundred and several thousand terms plus fingerspelling, but don't have immediate recall, often forget terms that they once learned, and have slow and halting conversations with their knowledge that are full of mistakes and words they don't currently know. We all have cellphones, of course, so our conversations tend to be a mix of signing and texting, especially since I maintain a “voice-free environment” at the events; so in a typical conversation, a person might sign, “I live in...” then spell the name of their neighborhood, then keep signing, “...I came here how?” then type, “The Dan Ryan?”, at which point the other person might show them the sign for “expressway.”

To be sure, no one will ever mistake our hiccupy, glacially slow dialogues for smooth, social conversation; but what's really amazed me in these first two meetups is that, when I go to the trouble of setting up a comfortable, non-judgmental “safe space” like this, where I don't feel any pressure to sign at a certain speed or to pretend that I'm comprehending the other person when I'm not (I quite literally sign “again, please” several hundred times over the course of an hour at these things, and that's not an exaggeration), I've discovered that I'm actually able to get through an entire long conversation and understand everything the other person is trying to say to me, as well as get my own point across to the other person in its entirety too, literally for the first time since starting to learn ASL beginning last March.

So despite the slowness, despite the jumping back and forth between signing and texting, despite the conversations having all the sophistication of a five-year-old talking with their grandmother — “Where do you live? Do you go to school? What do you do for fun?” — despite all this, the meetups have so far been the exact revelatory experience I was hoping they'd be, actual concrete proof that I'm learning how to communicate in sign language, that I'm slowly getting better and starting to inch my way towards full conversational fluency. To tell the truth, it seems like it's a revelatory experience for most of us who have so far been attending, which is a gratifying feeling that helps to justify the $180 I spent to get it up and going.

So, as my ASL 2 classes get cranked up to full speed again beginning this week, I will continue holding my real-world practice sessions every two weeks like clockwork, and going out to Deaf community social events where I can be regularly challenged to keep up at a level way beyond my current pay grade. And I will continue to maintain this blog without a break for at least the next eight weeks — or, you know, however long I end up going through my ASL 2 material before finally having to stop again to deal with tedium like making money — and as always am glad and humbled to have you along for the journey as well. If you're in the Chicago area, I strongly encourage you to join the Meetup group yourself, and hopefully make it out to some of our events regularly happening for the remainder of this year; or if you're in another city but would like to practice with me via video chat, I encourage you to drop a line too. Onward and upward, brave signers!

5/8: Thoughts after a semester of sign language. 4/24: Deaf culture primer: The “Deaf President Now!” student protests of 1988. 4/23: It's been harder than I thought it would be to find good sign language partners. 4/15: ASL Adventures: “Game of Thrones” night at Deaf Planet Soul. 4/8: ASL Adventures: The Chicago Inclusive Dance Festival, and my first “signing in the wild.” 4/3: He speaks! He speaks! ...Er, he signs! He signs! 3/28: Those sexy deaf teens sure are courageous!