Part 5 of my new Minecraft storytelling campaign, in which in the tradition of Victorian industrialists I bend nature to do my will

Hey, sorry I haven't gotten a Minecraft update posted in a while! Between all the reading I've been getting done this summer, all the movies I've been watching, and publishing a new book, gaming just hasn't been on the forefront of my mind for the last few months. I do, however, finally have some major news to share with you, perhaps the greatest engineering feat now accomplished in human history...

I exaggerate for humorous effect, of course, although admittedly this was a giant pain in the ass to actually accomplish, and took literally days upon days of patient digging for the 2,400 blocks of sand I needed to smelt enough glass to cover this large an area. And it was all for a good cause as well...

Behold! My industrialized tree orchard, the first fully completed part of the 10,000-square-block industrial farm I'm in the process of creating in Minecraft this year! 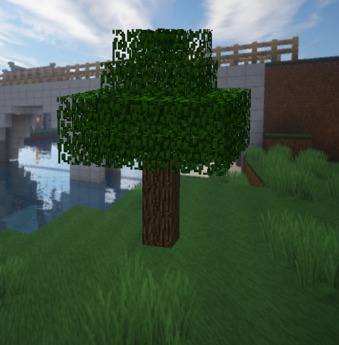 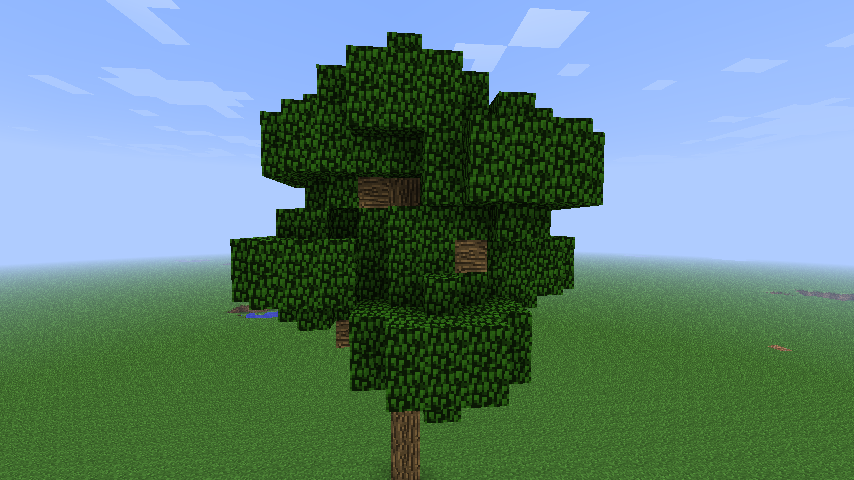 See, like a lot of the algorithm-based details of Minecraft, the oak trees in this game have kind of a screwy detail to them, as well as an algorithm-based way to overcome the screwy detail. Most of the times that you plant an oak sapling, you get a nice normal tree out of it, one that's easy to chop down from top to bottom while still just standing at ground level with your axe; but every so often, the math behind the game's procedurally generated universe decides to grow a giant oak instead, which is twisting and winding and can often grow up to 15 or 20 blocks high, making it a huge pain in the ass to try to cut down in its entirety so to get it out of your way and be able to plant a new sapling to replace it. The workaround is actually quite simple — you just place blocks above where the tree is going to grow (in my case, seven blocks above ground level, which is the maximum height you can reach with your naked hand in Minecraft), which then forces the tree to grow only that tall and no taller — but the problem is that you need such blocks above every tree that you want to stunt like this, which in my case took a massive 49 by 49-block ceiling to cover the full 50 by 50-block area of my industrial farm that I've decided to devote just to trees. 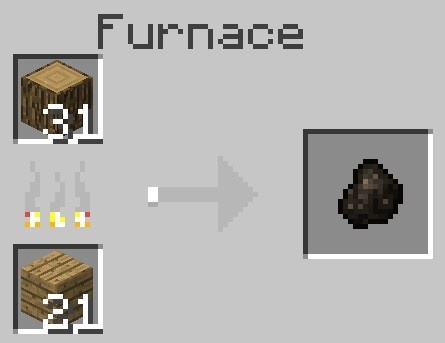 And why am I devoting an entire quarter of my 100 by 100-block farm to trees? Well, that's because I've decided to put aside and save all the coal I've been digging up in my mine, so to trade later with the villagers of my international commerce network — which regular readers will remember is the eventual end goal of this particular campaign, to level up all the villagers in a total of 10 or 15 villages into “master” status, so that they'll be regularly churning out enchanted weapons and armor for my coming Enderman Cult apocalyptic holy war (but see my previous entries for more on that), which you do by regularly trading raw goods like coal and clay and leather with them in return for what at first is pretty pedestrian items like stone tools and leather armor, as they slowly accumulate experience points with each successful new trade. But I need some sort of burnable fuel to power the industrial smelters that will be churning out the stone bricks and other material for my coming massive building projects; and it turns out that in Minecraft, you can actually burn wood logs using wood planks in order to create charcoal, which in the game works almost exactly like the coal you mine down in the earth with your pickaxe. And since, unlike real life, trees in Minecraft grow from saplings to full maturity in just a few “days” (in Minecraft, one game day equals ten real-time minutes in our reality), this makes the concept of a self-sustaining orchard devoted to charcoal production actually quite doable, and in fact rather easy, if not admittedly time-consuming.

(For what it's worth, my orchard contains 143 trees, a 12 by 12 grid but with one tree missing due to my ranch's central plaza [which will eventually be a beacon with a 50-square power radius, which is how I determined the size of my ranch in the first place]. The first time I tried a full growing and harvesting of this orchard, all the tree trunks grew to a height of exactly four blocks, no more and no less, which led to a total of 572 logs, which then got smelted into a total of 492 pieces of charcoal [or seven and a half stacks], once you subtract the 80 logs that got converted into planks to serve as smelter fuel. I went through four iron axes to do so, and it took three full game days to accomplish it [or half an hour of my actual real life]. The decaying leaves then produced 299 saplings, about twice as many as I need to reseed the entire orchard, as well as 29 apples. So not a bad yield at all, when all is said and done.)

This has given me the added bonus, then, of finally learning about hoppers in Minecraft and the process of automated smelting systems, which I've never used before this campaign because frankly I've never needed that much transformed material before. I'll have nicer setups once I finally build my underground processing factory devoted to the subject, but here above you can see two fairly ugly setups I'm using at the moment to churn out my first material for eventually building said factory. In the top image, note how you can actually attach two hoppers to smelters, one on the top that feeds in the material to be burned, and one on the side that feeds in the fuel to burn it; then if you place a chest or barrel on top of those hoppers, whatever's in those chests will slowly drop one item at a time into the hopper and then the smelter, which means you can load up those barrels with a theoretical maximum of 1,728 pieces of charcoal, wood, cobblestone, sand or whatever (27 slots multiplied by 64 items per slot), and then just let it work while you go do other things until eventually you have 1,728 pieces of stone or glass or whatever you're trying to make, which as you can see then drops out the bottom of the smelter into yet another hopper, which then automatically funnels it into a collection barrel at the very end of the process. Clever!

The bottom image, on the other hand, is the official first contraption I've built in my underground processing factory, which takes the wheat and grass seeds from my first of six coming industrial farming fields and drops them one piece at a time into a composter, which then converts them into “magic fertilizer” (aka bone meal), which can be used for everything from cloning flowers to making baby animals instantly grow into adult ones, speeding up the growth cycle of produce, dying white fabric, making white stained glass, creating white concrete, and a lot more. This will be a huge key in my plans to eventually become a business tycoon, using plentiful and fast-growing things like wheat and transforming them into ingredients that will make much rarer and slower-growing items duplicate at a fast rate themselves, such an important part of the plan that I will eventually be devoting another entire 50 by 50 quarter of my farm just to this.

“But Jason,” I hear you saying, “isn't all this automation and industrialization of the natural world around you kind of dehumanizing? Aren't you just basically copying the worst practices of the first Industrial Age tycoons of the real world, who back in the early 1800s essentially destroyed the land in their bid to make their millions? You bet your sweet bippy, sister! In fact, this is one of the things I'm very much purposely trying to embrace in this particular campaign, to picture myself as this lone adventurer and entrepreneur living all alone at the end of the Medieval Age out in the middle of this extremely dangerous and seemingly endless wilderness that surrounds me on all sides, and imagining what people in the real world back a few centuries ago must've faced when it came time to taming a little patch of this wilderness in order to make nature work for them instead of the other way around.

Remember, in the context of Minecraft, I am basically surrounded by tens of billions of blocks of such untamed wilderness, as well as all kinds of dangers that could kill me at any moment (zombies, giant spiders, exploding creepers, supernatural Enderman who will kill you for the crime of looking directly into their eyes, horse-riding skeletons armed with bows and arrows, not to mention the recent addition of wandering hordes of armored barbarians who will just show up in the middle of the day with no notice whatsoever, shoot you in your freaking face and steal all your crap, thanks a lot, Minecraft coding staff); and so a big part of the pleasure of this particular roleplaying campaign is the challenge of how to best protect myself in this endlessly hostile world, how to eventually protect and improve the villages I'll be trading with, and how to carve out a relatively tiny 10,000-square-block industrial ranch for myself within the middle of these tens of billions of blocks of untamed wilderness. (Although remember, like I've mentioned in past updates, I've put two limitations on this industrialization in my case — I'm not going to have any slaughterhouses for the industrialized killing of animals, which I consider an unnecessary cruelty even within the harmless world of video games, and I won't be building any rapey “breeding centers” for the industrialized creation of new villagers, which is so morally problematic I don't know where to begin.)

So that's it for now, and hopefully I won't go so long again before I have another update for you. But before I leave, I would be remiss if I didn't share the news that a derpy Enderman has managed to get stuck in the stairway down to my mine, where it's been hanging out pretty much for the entire time my universe has now existed. I actually learned that if you use a nametag on an Enderman, it will follow you around like a pet dog or cat, so I just may do this to poor little “Endee” simply to have some fun, and within the confines of my roleplaying to impress/terrify the local business owners who I will eventually be inviting over to my ranch when it comes time to recruit my cult army. As always, I'll keep you informed of the latest!