The war on pot has been won, and I had a front row seat.

A field report from Chicago Marijuana Legalization Day, and the party-like atmosphere in Andersonville around the city's oldest dispensary 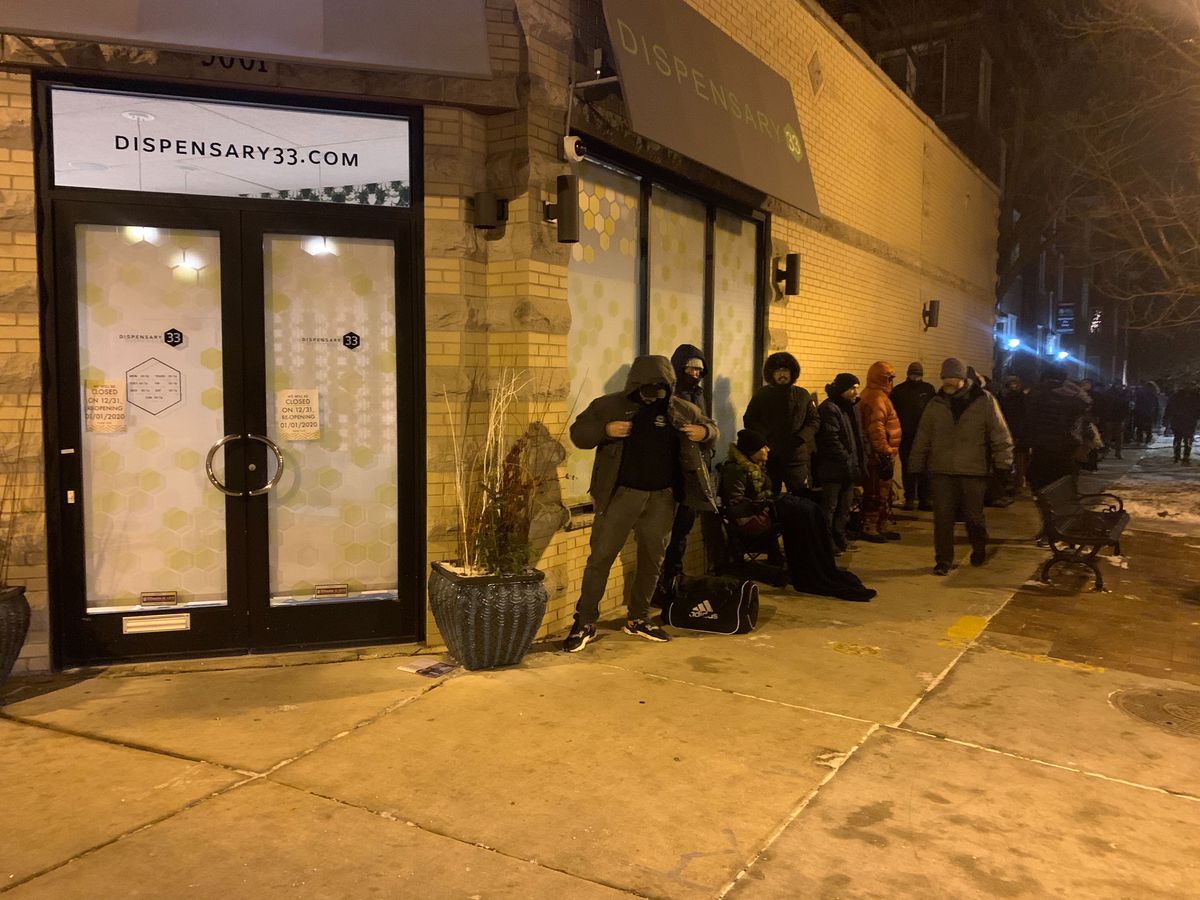 Oh, hey, by the way, marijuana is legal now in Chicago! Whaaaaaaaatt??!1! Chalk it up to a new business-friendly liberal Illinois governor and Chicago mayor in the last election, who have been working together this year to get that sweet, sweet 33 percent THC tax finally up and running into the state's coffers. I've been regularly smoking pot for about twenty years, and irregularly for a decade before that, but in middle-age have felt uncomfortable talking about it online because of the illegality of it all; but with that now out of the way, I suppose there isn't much of a reason to hold back with my thoughts anymore.

I decided to go out right on Legalization Day, January 1st, because I've gotten so curious about the various ways to ingest THC besides just “smoking a doobie,” as the kids say. (The kids still say that, right?) Like many, I've recently become entranced by the higher THC concentration and much bigger ease of use that comes with cannabis oil and “vape pens;” I've also never really tried edibles, unless you count New Year's 1999 when an old friend of mine from the poetry scene saturated a bag's worth of pot in butter and then cooked it under low heat for an hour (which he called “voodoo butter”), then we ate all the butter on sandwiches and got so messed up we could barely think straight. In fact, even the “dabbing” of crystalline concentrates is now legal in Chicago and no further than a two-mile walk and 80 bucks in cash, and this is to say nothing of cutting-edge ingestion options like sprays, patches, and plastic strips to put under your tongue. And I'm going to try them all as the year continues, so thought I'd kick things off right on the first day one could do so.

Of the nine medical marijuana stores (or “dispensaries”) that got permission to open to the general public right on January 1st, one of them is actually just a ten-minute walk down the street from my apartment; but that's also the one serving Wrigley Field, Lakeview and Lincoln Park, so I knew in advance that that one would be a bit of a nightmare to navigate. So instead I went northward to the Andersonville neighborhood, famous for the Scandinavian immigrant population who moved in there in the late 1800s, and now one of the main neighborhoods where you find “creative class” people like startup employees, artists, DJs, NGO staff, etc. It's the home of Dispensary 33 (named for the year that Prohibition of alcohol was overturned), which has the honor of having made the first-ever Chicago sale of medical marijuana back a few years ago, and in December loudly declared its intention to do something massive on Legalization Day.

They ended up employing this rather nifty crowd-management software, and I wish I knew what specific app it actually was. (UPDATE: Thanks to Dispensary 33 for tweeting me and letting know that it's TablesReady.com!) Basically, several thousand people showed up to each open dispensary in the city on January 1st; but unlike most of the others, who forced people to stand unmoving in a line outside in 25-degree weather for four or five hours, Dispensary 33 had a heated tent outside the store with eight people constantly in the process of taking people's phone numbers and then dismissing them, which made the outdoor line there move super-fast. Then you could just go home, head to a cafe, or stop in one of the many neighborhood bars that Dispensary 33 convinced to open at nine in the morning (most of whom were doing 420 drink specials and bringing in live bands later that afternoon) and their software would text you when it was time for you to get into the tiny line at the store itself, which I'm assuming was somehow wired to their cash register system, so that every time a customer went out the door it called a new one to come get ready.

I mean, yes, at 10:30 am when I got signed in, I was told that it would be a two-hour wait, when in fact it turned out to be eight hours, which I entirely spent at a Starbucks up the street reading a book, because I didn't want to get all the way home just to suddenly get paged with no notice. But it was hard to get angry on Legalization Day no matter how many headaches, because it just felt like such a magical non-reality fantasyland that we were being allowed to march into a Clark Street storefront and walk out with hospital-grade weed completely legally. In fact, the entire neighborhood had the giddy feel of a block party all day, with people constantly driving up and down the main drag honking their horns while waving pot leaf flags out their windows. I also ended up making several new friends who were all twenty-something southside hiphop artists, because a little community of us was gathering around the #dispensary33 hashtag update page at Twitter all day, seeing what everyone else was having to say about what the current estimated wait time was at any given moment. (This, by the way, I believe marks the very first time in my life I've gathered breaking news updates through tweets. Ah-hah, I knew those Millennials were on to something!)

The actual purchasing process is very technical and regimented, because another thing that's come with legalization is a new high-tech requirement to follow every cannabis leaf from growing field to store to customer, so that no tax-free black market is allowed to thrive. (Make no mistake — politicians aren't even pretending this is a social issue, but rather exclusively a financial one, so commandment number one to never be broken is, “Thou Shalt Not Horndog The Government Out Of Their Cut.”) So first you go into a closed-off front lobby, where they scan your ID and issue you your own printed in-house barcode; then you go through a door into the store itself, tastefully minimalist like IKEA, with cellphone-like table displays showing all the various things you can buy. About five minutes later an Apple-Store-like roving staffer with iPad remote cash register connects with you to do your order; then you take your barcode to a separate person behind a counter who does nothing but handle cash, the only payment currently allowed. Behind them, then, is a window into a lab-looking room where all the actual merchandise is stored, full of white-jacketed slackers looking at order screens and assembling tote bags, with one person acting as a go-between who runs the assembled tote bags out to the sales floor and collects your barcode as final confirmation. A thirty-minute walk later to make up for the eight hours I spent sitting that day, and I'm home with my stuff and Bob's your uncle!

Another thing to get used to is that weed has now officially landed in the sphere of wine snobs and craft brewery nerds; and so that means that all these products have ridiculously detailed and jargon-heavy descriptions at the Dispensary 33 website, when the most detail I would ever get from a dealer in the last twenty years would be, “Oh, it's primo, man.” Since I have no relative idea of what the numbers mean at this point, I thought I would just start with the most potent stuff they even sell, then work my way down if need be to get to a level of THC that sits comfortably with me. So for my very first visit, that resulted in 500 milligrams of cannabis oil with a THC count of 86 percent, a free rechargeable battery pen for it with the dispensary's logo, and a four-piece chocolate bar with a grand total of 100 mg THC, or 25 mg in each small piece. Those have since proven to be...um, excessive, so I'm only having to take two or maybe three inhales of the pen to get to a nicely happy level, versus a half-hour previously of grinding dried flower, rolling three joints, then smoking all three of them.

The irony right now, or at least I see it as an irony, is that for opening week when prices are just starting to get sorted out, dried flower (what you think of when you think of “weed”) is cartoonishly more expensive than anything else in terms of actual THC you're receiving, which I think says a lot about sociology and about economics. With most dried flower strains logging in at 20 to 30 percent THC, you can roughly think of one 500 mg oil canister as being able to get you as high as a quarter-ounce of dried flower (I know, weed nerds, it's more complicated than this, I know); and the oil I bought was $60, right on par with what I was paying for the same amount of THC illegally, which was $65; but dried flower on opening day was $120 to $140, which is not just a natural amount of expensive because of its popularity but is almost like the weed version of Uber surge pricing. And edibles are even a cheaper high than all this; if you think of most casual users eating around 10 to 15 mg at a time, the $30 candy bar I bought would get you good and high eight or nine times for a “high per capita” of around $3.50.

The only explanation I could think of is that weed is what's overwhelming expected right now, so weed must grossly dominate the purchasing of casual new users right now, which is why they're jacked up in price way more in proportion than what's expected from oil, edibles, concentrates, etc. Weed is the only option that's fun to do with other people; the ritualized details are like the Millennial tea ceremony, the smell and the smoke and the intimacy and the live flames all being an integral part of the experience, which is why so many people opt for it, which is why the price is cranked way up. That's Capitalism 101, which is an interesting thing to have the opportunity to explore, being on the ground floor when the rules of a new industry get invented for the very first time.

So I'll continue my adventures, including sometime soon finally going over to Sunnyside Dispensary in my neighborhood, and will occasionally check in with you again about all this. Bon chance!

*When you contribute as little as $1 a month at my Patreon account, you receive a centralized email every Friday with the latest announcements of new blog entries, new photos at Flickr and Instagram, new book and movie reviews at Goodreads and Letterboxd, new rare books at eBay, new handmade notebooks at Etsy, and the most interesting Twitter news links of the week. Get it all at patreon.com/jasonpettus.